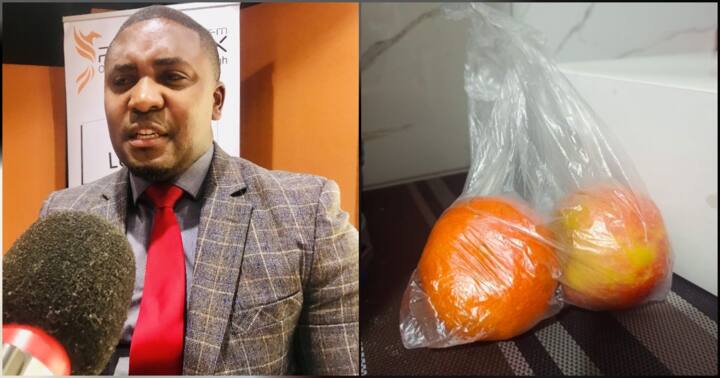 A Zambian politician and entrepreneur has narrated how a street vendor paid back his kindness on his birthday Jackson Silavwe said he noticed a woman who usually sold fruits outside his office had not been coming to work for weeks On learning that the woman had undergone surgery, he looked for her and kept chicking on her o know how she was doing When the woman learned that it was Silavwe’s husband, she walked into his office and gifted him an apple and a tangerine

In a world where cruelty is the order of the day, often many people do not know any better than to expect something in return when we do good to others. Zambian Street Vendor Gifts Kind Man Fruits on His Birthday for Checking on Her after Surgery Source: Facebook We grow innocently not knowing what we are up against in this world and not only after we have realised that life is not all cookies and cream as we are raised to believe.

Understanding this concept, Jackson Silavwe, president of Zambia’s Golden Party, was surprised when a street vendor gifted him fruits on his birthday after his kind gesture towards her. Narrating what had happened, the politician and entrepreneur said a few months ago he noticed that the lady who sold fruits outside his office had been missing for some weeks.

PAY ATTENTION: Follow us on Instagram – get the most important news directly in your favourite app! “I inquired from one of our guards who later informed me that she had undergone an operation recently and was recovering at her home,” he wrote on Facebook. I didn’t even know her name,” added the politician who is also a mentor Silavwe tasked the guard to get him the woman’s contact and after some days of asking for her phone number, the guard took it to Silavwe.

READ ALSO Twitter to depose Elon Musk ahead of buyout deal trial He immediately called the woman to find out how she was doing and also sent her some money to help her with some things at home as she recovered from the surgery. “I continued checking up on her until she came back to sell the fruits outside my office,” he said. However, Silavwe did not reveal why the woman had undergone surgery.

Upon hearing that September 15, was the politician’s birthday the woman walked into his office and gifted him an apple and a tangerine as his birthday present. “I was and still am greatly moved and humbled by her gesture. She has deeply touched my core. I am very grateful.