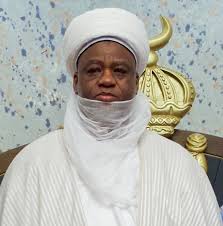 The Sultan of Sokoto, Alhaji Muhammad Sa’ad Abubakar lll, has called on the 36 state governors in the country to set religious and political differences aside to face security challenges which is currently ravaging the country.

Sultan Sa’ad Abubakar made the remark when he received Bauchi state governor, Senator Bala Mohammed Abdulkadir who paid him Sallah homage in his palace.

The Sultan, who noted with concerns how insecurity has hampered the socio-economic and educational activities, especially in the northern region, urged the governors to put their head together and find way to tackling insecurity.

The monarch pointed out that the governors have crucial task ahead in bringing an to end or reduce criminal activities in the North in particular and the nation as a whole.

According to the royal father, ending the menace was a collective responsibility of the governors as leaders in their different states, stressing that this could be achieved responsively when they work as a body.

“You must also jettison sentiments of all kinds and brace up to the challenge, irrespective of ethnic, political and religious affiliations.

“We have to come to terms with the security realities as what is affecting to us as a nation and proffer solutions. Let us see it as a collective concern that requires collective approach in unity,” he stressed.

The Sultan also advised politicians to always put trust and belief in the Almighty God because He alone gives and takes power to whomsoever He wishes.

Earlier in his statement, the Bauchi

state governor, Senator Bala Mohammed said he was in the state to pay Sallah homage to the Sultan because he has never been to Sokoto state in his capacity as governor of Bauchi state.

“Your Eminence, you have been to Bauchi on 3 different occasions during this period of my stewardship as governor of Bauchi state, being one of the states under the control of the Caliphate. I always feel bad when I did not reciprocate the visit.

“It’s this morning I told myself that this Sallah period is the most appropriate time to come to my father and leader to pay him homage and seek his blessings,” he said.

The governor was led into the palace by his host, the governor of Sokoto state, Barr. Aminu Waziri Tambuwal.