SA is committed to enhanced bilateral trade with Kenya and more investment in each other’s economies, says Ramaphosa 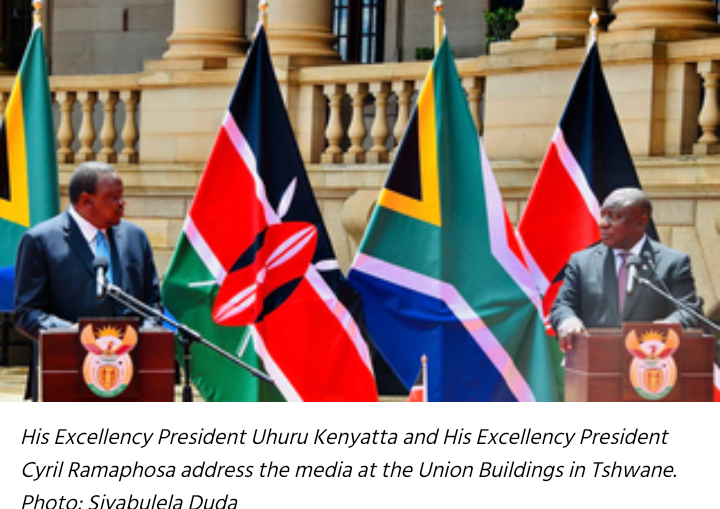 South Africa and Kenya have agreed to increase both the volume and composition of bilateral trade, as well as investing more in each other’s economies, to address the existing trade imbalance.

President Cyril Ramaphosa yesterday requested both countries’ ministers to remove any unreasonable barriers or challenges that were stifling efforts to ramp up these efforts.https://47c08c75efa2ddc2a1da0d48186e146a.safeframe.googlesyndication.com/safeframe/1-0-38/html/container.html

This as the two countries signed eight Agreements and Memoranda of Understanding in the fields of tourism, health, transport, and migration, amongst others.

Ramaphosa, who was hosting Kenya’s President Uhuru Kenyatta on a State Visit, committed to increasing the volume and broadening the composition of trade between the two countries.

“We will be working together to identify Kenyan export products for which there are great growth opportunities in South Africa,” he said.

“We are also committed to investing more in each other’s economies.

“As part of our efforts to promote intra-African trade, we will continue to look for opportunities to procure goods and services from each other before considering suppliers outside the continent.”

Kenya is one of South Africa’s largest trading partners in Africa outside of the 15-nation Southern African Development Community (SADC).

Bilateral trade has been constant between the two countries, but investment has mainly been characterised by South African companies investing in Kenya over the past five years.

Addressing the trade imbalance, Kenyatta said that areas where either country held an advantage should be addressed and put into balance.

“Given the importance of South Africa and Kenya on the continent, addressing the bottlenecks and the trade and investment regime between our two countries is an important building block towards harnessing the benefits of the Africa Free Trade Area,” he said.

As a result, consultations were finalised on the technical requirements on immigration matters, simplifying visa processes and enabling easier movement of people.

Ramaphosa said a task team at the level of the two presidents will be set up to improve ease of travel and address any visa-related challenges between the two countries.

“We therefore acknowledge progress made in the areas of tourism and immigration, including the introduction of e-visas for Kenyans travelling to South Africa,” he said.

“We are committed to exploring further measures to ease travel between our two countries as an important part of strengthening trade, investment, tourism and cultural ties.”

The captains of industry who were gathered at the SA-Kenya Business Forum also signed a number of strategic partnership frameworks to strengthen trade relations between the two countries.

Richard Ngatia, president of the Kenya National Chamber of Commerce and Industry (KNCCI), said South African businesses were more than welcome in Kenya.

“We, Kenyans, promise favourable terms for investments and a predictable business environment; most companies with South African roots are operating and thriving in Kenyan market, including MultiChoice, Mr Price, Old Mutual, and Dimension Data, to mention just a few,” Ngatia said.

“Tatu City, one of Kenya’s special economic zones, has attracted at least over $100 million of investments by South African companies.”