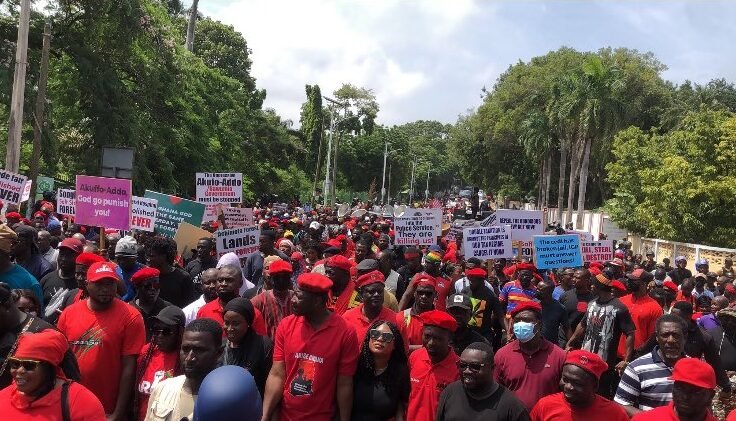 Ghana police say they arrested 29 demonstrators on Tuesday and report that 12 of their officers were injured in the clashes which they blamed on demonstrators throwing stones at them.

Arise Ghana (#AriseGhanaProtest), which organised the protests, is supported by the opposition activists including the National Democratic Congress’s (NDC) Sammy Gyamfi and former chairman of the People’s National Convention Bernard Mornah. Gyamfi is close to the NDC’s probable presidential candidate John Mahama.

Arise said its supporters were protesting against worsening economic conditions – inflation is running at over 20% in Ghana and a third of people under 30 are unemployed – as well as the new levies imposed by the government.

The shockwaves caused by Moscow’s invasion of Ukraine are holding back growth and exacerbating the country’s debt service burden.

On Tuesday, protestors gathered at 8 am at Obra Spot at the busy Kwame Nkrumah Circle in Accra. Clad in red and black, they sang and chanted, wielding placards demanding the government should “Fix Ghana now!” and “Reduce fuel prices now”.

Other demands covered by the protestors focused on the delayed payment of allowances to the beneficiaries of youth employment programmes, frequent foreign trips by the president, and controversial declassification of the Achimota forest among others were their messages.

A day earlier, Arise Ghana, lost its case in court over its right to hold the protests deep into the night and converge at the seat of government, the Jubilee House in the centre of Accra.

The court ordered the protest should end by 4pm on Tuesday at Independence Square, an area where the police thought that they could secure.

A last-minute move by the protest leaders to take a different route for the demonstration through other streets in the capital was resisted by the police.

What followed next was the sound of gunshots as some angry protestors pelted the police with stones. Then the police fired tear gas and water cannons at the protestors leaving scores of them injured.

Police report that 12 of its officers were hit with stones “without any provocation” and some of its vehicles were also destroyed in the melée.

“The police have arrested 29 demonstrators for their participation in violent attacks on the Police… The organisers of the demonstration will be arrested and put before court for the attacks and damage to public property,” the police said in a statement.

The Police have arrested 29 demonstrators for their participation in violent attacks on the Police and some members of the public including school children during the Arise Ghana demonstration in Accra. pic.twitter.com/mzlEOMcCVx

At a press conference for Arise on Tuesday evening, Gyamfi said: “The police started pushing the people back and they started firing tear gas at us. Immediately, we saw people throwing stones [at the police] and these people are not Arise Ghana demonstrators. These were provocateurs planted in our midst by the police.”

1st frame is the police officer who dressed as a demonstrator and threw the first stone at the police to cause mayhem. Arise Ghana called for his arrest but the police rather called reinforcement to do more violence!!!
The police is a wicked entity!!#AriseGhanaDemo pic.twitter.com/esx98PDFvy

“They also sprayed hot water on us and these were totally needless. We are unfazed by this and we will not be cowed into silence. Our hands and conscience are clean.”

Information Minister Kojo Oppong Nkrumah pushed back hard at his own press conference on Wednesday morning as protestors gathered for another demonstration.

“There’s an obvious attempt to create instability in our country at this time and we don’t need to mince words about it… We have people attacking the police in this manner. Can you imagine what would have happened if indeed some of these things were allowed to continue through the night?”

Some videos posted by protestors appear to show police shooting at protestors, as a man displays his bloodied hand to the camera. Other videos show police firing tear gas canisters and water cannons into an apparently peaceful crowd.

Many protestors on Twitter have reported that a stray bullet fired by police had hit a man in the eye and badly injured him.

In its own tweets, the police service pushed back against the claims: “What a shame, we were there to protect you and ensure your safety, but you throw stones at us, injure and hurt us.” They added that video footage of the demonstration is being reviewed.

Attack on Police in the Ongoing Arise Ghana Demonstration

What a shame, we were there to protect you and ensure your safety, but you throw stones at us, injure and hurt us.

This behaviour is unacceptable and must be condemned. pic.twitter.com/8FGeycExJD

At the end of February 2022, inflation hit at 15.7%, its highest level since December 2016. Alongside that Ghanaians have to navigate the effects of the fast-depreciating currency and the controversial e-levy which taxes electronic transactions, raising over US$1 billion a year for the government. Critics say it will disproportionately hit smaller businesses and poorer Ghanaians who rely on internet transactions for ease and efficiency.

Those concerns combined with delays in infrastructure projects and public rows over high-cost ventures like the new national cathedral are putting the government on the backfoot.

That is exactly why Arise Ghana, and its oppositionist backers, see an opportunity to organise more mass protests.