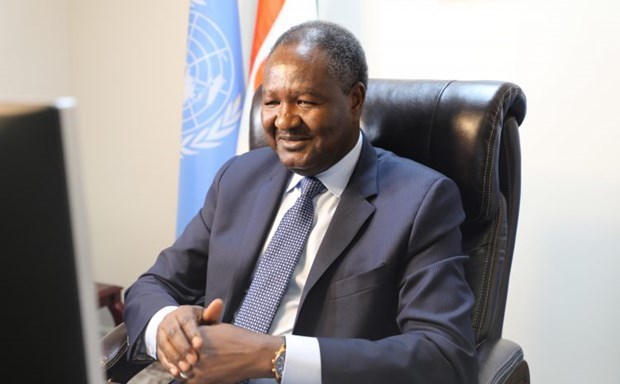 Ambassador Abdou Abarry, Permanent Representative of Niger to the United Nations (UN) has hailed Vietnam’s contributions to the UN Security Council (UNSC) as a non-permanent member of the council for the 2020-2021 tenure.

Ambassador Abarry made the statement in an interview granted to Vietnam News Agency correspondents in New York, during which he praised that Vietnam assumed the rotating presidency of the UNSC in the first month of its tenure, and thanks to that, other members can learn the country’s experience in the work.

The open debate session initiated by Vietnam at that time on multilateral cooperation drew the attention and participation of hundreds of countries, he said.

In issues related to humanitarian crises in Afghanistan, Syria and Libya, “we all heard the voice of Vietnam,” he said, adding that Vietnam also raised its voice to fundamental and urgent issues such as sea-level rise.

The Ambassador said Niger received Vietnam’s complete support when it initiated the matter on the connection between climate change and security, and proposed to approve a resolution on this issue in December when Niger holds the rotating Presidency of the UNSC.

He spoke highly of Vietnam’s strong voice in urgent situations during the past two years at the UNSC, adding that Niger was also supported by Vietnam in discussions on regional mechanisms, especially the current situation in Myanmar. Vietnam proposed that the council should not make any immediate decisions on the Myanmar issue before listening to opinions from Southeast Asian countries.

He also hailed Vietnam’s initiative on strengthening cooperation between UN agencies and regional organisations such as the African Union (AU) and the Association of Southeast Asian Nations (ASEAN).

The diplomat expressed his belief that when the five non-permanent members, including Vietnam, end their term at the UNSC, they will leave good impressions. African countries thanked Vietnam for its support in decision making related to issues on Africa, he added./.