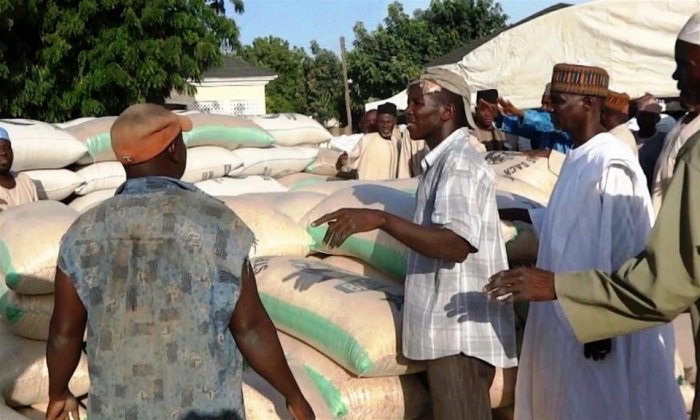 Bwari Area Council of the FCT has distributed 900 bags of grains to residents of the area, as part of palliatives to cushion the effect of the lockdown occasioned by the COVID-19 pandemic.

The Chairman of the Council, Mr John Gabaya, disclosed this to newsmen on Saturday in Abuja.

Gabaya said that the effort was to complement the efforts of the FCT administration toward relieving residents from effects of the lockdown.

He listed the items to include 600 bags of rice and 300 bags of maize, adding that it would be distributed to the poor ahead of palliatives being provided by the FCT administration.

Gabaya said: “We sympathise with the residents over the lockdown and decided to ease their suffering through this gesture.

“A committee represented by Councillors of all the 10 wards and led by the vice chairman of the council, has been constituted to ensure proper distribution of the items.

“The committee also includes representatives of all religious and traditional leaders in the council and all political party representatives because the situation affects every Nigerian.

“The palliatives will be distributed accordingly and judiciously to ensure they get to the poor residents.

” This is just from the area council, the FCT administration is working tirelessly to assist residents of the territory during the lockdown.

Also speaking, the Vice Chairman of the Council, Alhaji Aminu Guma, who is also the chairman of the committee on the distribution of the council’s palliatives, promised to ensure order in the process.

Guma advised residents to remain indoors in accordance with the stay-at-home order of the Federal Government, as the items would be shared from one house to another.

He also assured residents that the distribution was irrespective of political party membership, religion or ethnic group but was meant to touch the lives of every resident locked down within the council.

Mr John Awoyi, Youth Leader in the council, while appreciating the gesture, commended the Federal Government’s efforts to curtail spread of the pandemic.

Awoyi described the intervention as timely, adding that it would mitigate the effect of the lockdown on the residents.

He, however, called for the review of the lockdown as it was affecting businesses and families in the search for alternative means of livelihood. (NAN)