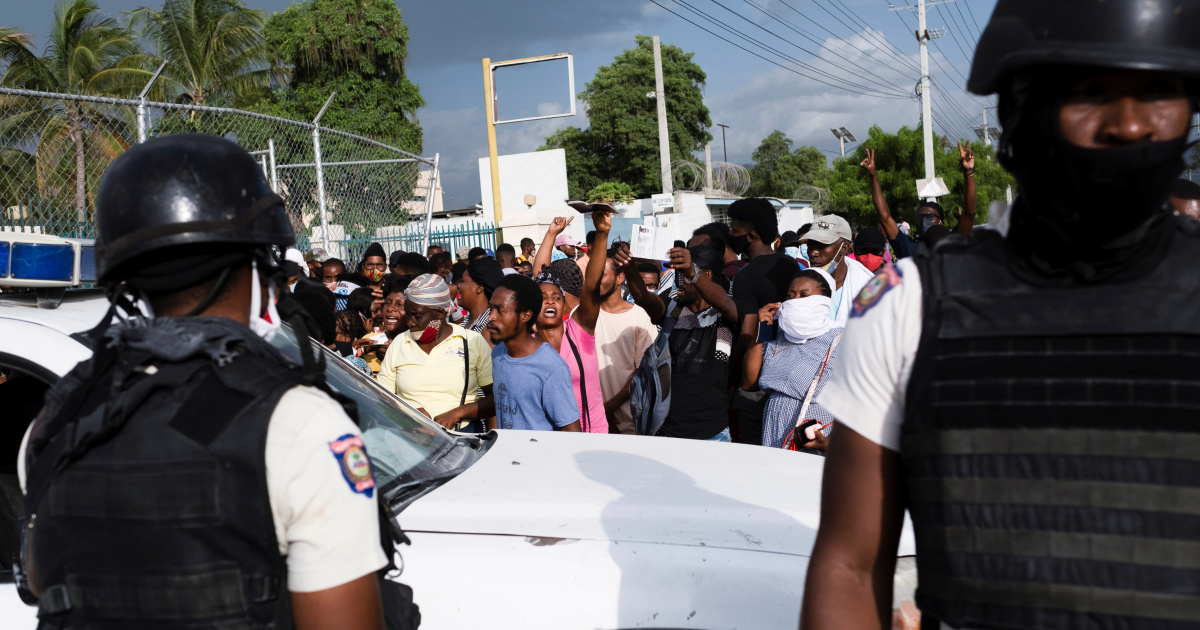 Haiti has requested that the United Nations and the United States send troops to help secure key infrastructure after the assassination of President Jovenel Moise plunged the country into political turmoil, according to several reports.

A letter from the prime minister’s office to the UN offices dated July 7 – the day Moise was shot dead in his home – said the aim was “to support the efforts of the national police aiming to reestablish security and public order in the whole territory”. The letter was reviewed by the Reuters news agency.

The 15-member UN Security Council would need to authorise a deployment of UN peacekeepers or police to Haiti.

“We thought that the mercenaries could destroy some infrastructure to create chaos in the country. During a conversation with the US Secretary of State and the UN we made this request,” Pierre said.

The news website, Military.com is also reporting that the US has confirmed that the request.

“The Haitian government has requested security and investigative assistance, and we remain in regular contact with Haitian officials to discuss how the United States can assist,” Pentagon spokesman Air Force Lieutenant Colonel Ken Hoffman told the website in an email.

The assassination of Moise by a squad of gunmen in the early hours of Wednesday morning at his home in Port-au-Prince pitched Haiti deeper into a political crisis, which may worsen growing hunger, gang violence and a COVID-19 outbreak.

So far, the US said it is dispatching senior officials from the FBI and Department of Homeland Security (DHS) as soon as possible to assess the situation and see how best they can assist, the White House said.

Two US law enforcement sources, speaking on condition of anonymity to discuss an active investigation, told Reuters that agencies were looking into US connections to the killing.

A State Department spokesperson said, “We are aware of the arrest of two US citizens in Haiti and are monitoring the situation closely. Due to privacy considerations, we have no further comment.”

The head of Colombia’s National Intelligence Directorate and the intelligence director for the National Police will also travel to Haiti with Interpol to help with investigations, Colombian President Ivan Duque said on Friday.

“We offer all possible help to find out the truth about the material and intellectual perpetrators of the assassination,” Duque wrote on Twitter, saying he had just spoken on the phone with Haiti’s interim Prime Minister Claude Joseph.

Police in Haiti said the assassination was carried out by a commando unit of 26 Colombian and 2 Haitian-American mercenaries. The two Haitian Americans were identified as James Solages, 35, and Joseph Vincent, 55, both from Florida.

Seventeen of the men were captured – including Solages and Vincent – after a gun battle with Haitian authorities in Petionville, a hillside suburb of the capital Port-au-Prince, where Moise resided.

Three others were killed and eight remain at large, according to Haitian police. Authorities are hunting for the masterminds of the operation, they said.

A judge investigating the case told Reuters that Moise was found lying on his back on the floor of his bedroom, with 12 bullet wounds and his left eye pushed in. The front door of the residence was covered in bulletholes and had been forced open, while other rooms were ransacked.

“His body was riddled with bullets,” Petionville tribunal judge Carl Henry Destin said. “There was a lot of blood around the corpse and on the staircase.”

Who’s behind the attack?

Days following the attack, questions continued to swirl in the country over who killed the president and why.

“Foreigners came to the country to perpetrate this crime. We, Haitians, are appalled,” a resident of the capital told the AFP news agency.

“We need to know who is behind this, their names, their backgrounds so that justice can be served,” he added.

Senior police officers, directly responsible for the security of the Haitian president, are in the hot seat and have been summoned to appear before the courts, said Port-au-Prince government commissioner Bed-Ford Claude.

“If you are responsible for the security of the president, where were you? What did you do to avoid this fate for the president?” Claude said.

Others have speculated on the possible involvement of security agents in the killing, adding to the confusion.

“The president of the Republic, Jovenel Moise, was assassinated by his security agents,” former Haitian Senator Steven Benoit said on Magik9 radio Friday.

“It is not Colombians who killed him. They were contracted by the Haitian state.”

Moise had faced mass protests against his rule since taking office in 2017 – first over corruption allegations and his management of the economy, then against his increasing grip on power.

Moise himself had talked of dark forces at play behind the unrest: fellow politicians and corrupt oligarchs who felt his attempts to clean up government contracts and to reform Haitian politics were against their interests.

Investigators in Colombia discovered that 17 of the suspects had retired from Colombia’s army between 2018 and 2020, armed forces commander General Luis Fernando Navarro told journalists on Friday.

Jorge Luis Vargas, director of Colombia’s National Police, said initial investigations had shown that 11 Colombian suspects had travelled to Haiti through the resort city of Punta Cana in the Dominican Republic, which shares the island of Hispaniola with Haiti.

Two others travelled via air to Panama, before flying to Dominican capital Santo Domingo and then Port-au-Prince, Vargas said.

The Haitian government has declared a 15-day state of emergency on Wednesday to help authorities apprehend the killers but has since urged businesses to open up again.

Moise’s killing sparked confusion about who is now the legitimate leader of the country of 11 million people, the poorest in the Americas.

“The assassination … has provoked a political and institutional vacuum at the highest level of state,” said Haitian opposition politician Andre Michel. “There is no constitutional provision for this exceptional situation.”

The 1987 constitution stipulates the head of the Supreme Court should take over. But there is no one currently in that role. Nor is there a sitting parliament, following the postponement of elections in 2019.

Just this week, Moise had appointed a new prime minister, Ariel Henry, to take over from Joseph, although he had yet to be sworn in when the president was killed.

Joseph has appeared to take charge of the situation, but Henry – who is viewed more favourably by the opposition – told Haitian newspaper Le Nouvelliste he did not consider Joseph the legitimate prime minister.