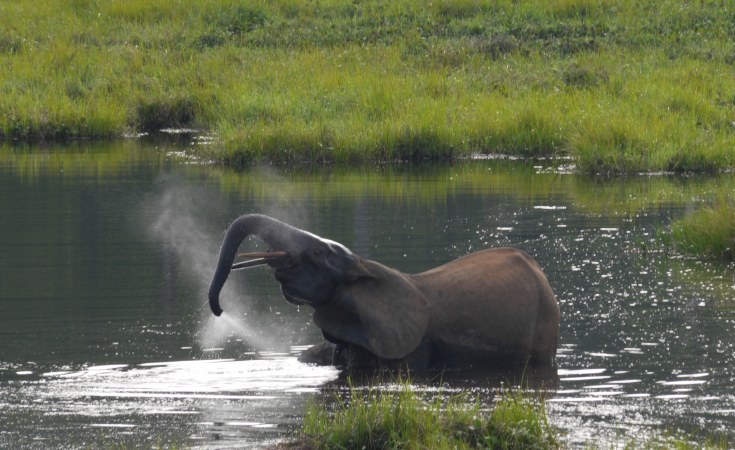 The man, dubbed “the butcher of Nouabale Ndoki” park in the Republic of Congo, is set to spend the next 30 years in prison. The park is a refuge for the region’s rare forest elephants and is protected by UNESCO.

A notorious Congolese poacher was convicted to 30 years in prison for ivory trafficking and attempted murder of park rangers, a conservation group said on Tuesday.

Originally from the Democratic Republic of Congo, Mobanza Mobembo Gerard was handed the sentence in a criminal court of the neighboring Republic of Congo, Brazaville, according to a press release by NGO Wildlife Conservation Society (WCS).

It is the longest sentence handed to a poacher in the Republic of Congo, which had previously convicted poachers with up to 5 years in prison.

The 35-year-old man was known as “the butcher of Nouabale Ndoki,” after the park where he targeted the animals.

The Nouabale Ndoki National Park was created in 1993 and is part of the Sangha Trinational that stretches across Congo’s borders with Central African Republic and Cameroon. It was given UNESCO World Heritage status in 2012.

The park covers 4,000 square kilometers (1,540 square miles) and its dense lowland rainforest has served as a refuge for the region’s rare forest elephants, which were only confirmed to be a separate species from the larger African savanna elephant in 2010.

Gerard is said to have led poaching expeditions in the Republic of Congo that may have resulted in the death of over 500 elephants since around 2008, WCS said.

The sentencing “sends an extremely strong message that wildlife crime will not be tolerated and will be prosecuted at the highest levels,” WCS regional director Emma Stokes said.

Richard Malonga, head of WCS Congo, which works directly with the Nouabale Ndoki park said the detention creates “opportunities to criminalize acts of poaching, and punish poachers even more severely.”

Congolese judicial authorities have not yet commented on the ruling.