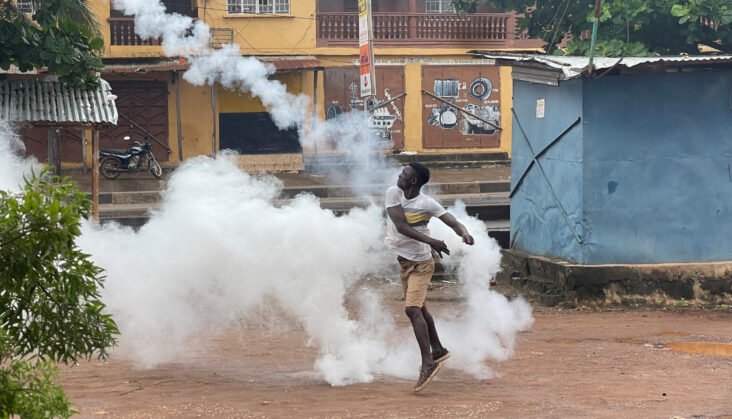 According to the World Bank, more than 50% of the eight million-strong population live below the poverty line.

Protesters say the government has not mitigated the effects of rising prices of essential goods.

Sierra Leone is not alone, and protests have been taking place in several African countries due to rising prices, particularly of fuel.

Some sources site six civilians killed, while others say the number is as high as 21.

In Sierra Leone protests that turn violent are uncommon.

The scene on the ground

A video verified by Reuters showed a police officer firing a gun into a crowd in Freetown. Sulaiman Turay, a 19-year-old living in east Freetown stopped marching when the police began to fire tear gas at protesters. Watching from his porch later, he saw others getting shot by law enforcement. Turay told Reuters: “I think people are shocked. It’s not the country we know. Sierra Leone is a peaceful place.”

Staff in Freetown’s main mortuary reported at least 13 civilians were shot dead. Hospital sources said four civilians were killed in Kamakwie and another four in Makeni. Police chief Sellu says that his police force arrested 113 suspects across the country.

President Julius Maada Bio, who is currently out of the country, has said that the circumstances will be “fully investigated”. The next elections are scheduled to be held next year, and Bio is expected to run for re-election.

Youth minister Mohamed Orman Bangura referred to the protests as an “act of terrorism”. He said: “Those people aren’t protesters. There is a difference between protests and riots and acts of terrorism. Protesting is different from acting as a terrorist […] going against the state, killing young police officers.”

The government imposed an indefinite nationwide curfew on Thursday 12 August, and calm has for the moment been restored. According to NetBlocks, a watchdog organisation monitoring cybersecurity and the governance of the internet, the internet services in the country were cut for two hours on Wednesday and again overnight.