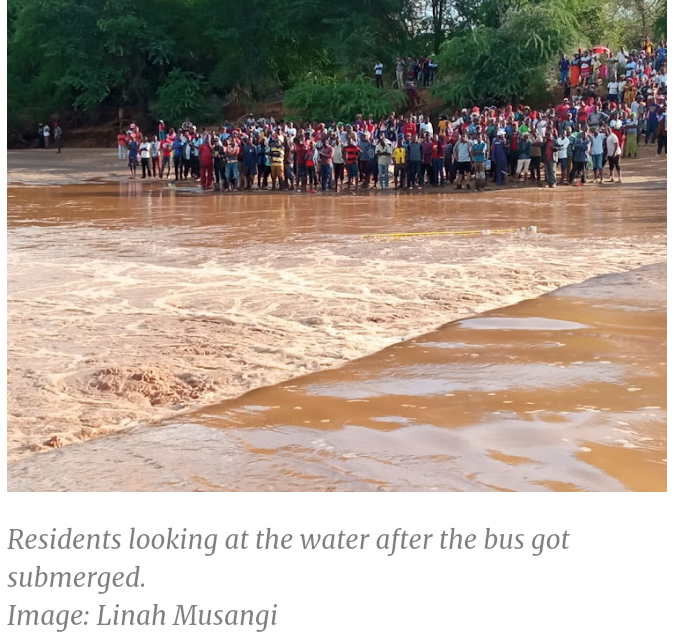 They died after a St. Joseph’s Seminary  bus they were traveling in was swept away by water at a rift while it attempted to cross the river at around 1.30 pm on Saturday.

A communication circulated to members from the church leadership seen by the Star indicated that the victims were headed to a wedding ceremony when the incident occurred.

“Dear parishioners and friends of St. James, good evening. Allow me to inform you that our Catholic Church choir of the Good Shepherd – Mwingi were today involved in a tragic road accident on their way to attend a wedding for Fr Benson Kityambu’s brother at Nuu. As the driver tried to cross the Enziu river, the St. Joseph’s Seminary bus lost control and was swept away by the strength of the water. So far, we have lost 22 members, some are bodies still being searched, some saved and rushed to Mwingi Level 4 Hospital. Fr Kityambu has lost 11 nieces. We have also lost to religious brothers who work in seminary. Beloved, let’s continue praying for the repose of the souls of the faithful departed,” read the message.

At least 24 people died while 12 others were rescued after the bus capsized in the river in Mwingi East on Saturday.

The 12 include four children and eight adults. Fifteen of the dead are members of the same family who were going to attend a wedding of an elderly couple aged over 70 years.

The wedding which was to take place at Nuu-Mwingi did not take place following the tragedy.

“I want to send my heartfelt condolences to the families who lost their loved ones in this incident and pray that God will give them strength and fortitude to bear the pain of loss,” Ngilu said.

The death toll from the incident is expected to rise as some bodies were still trapped inside the bus when recovery efforts were suspended by nightfall.

“For now as it is getting late, we would be asking people to go back to their homes and that we start this operation tomorrow,” Ngilu said at the scene of the accident on Saturday.

“Meanwhile, I’m going to put a lot more pressure on the national government to complete this bridge because this bridge has truly caused a lot of pain,” added the governor.

Ngilu said the retrieved bodies had been airlifted by Kenya Air force to Mwingi and Kyuso mortuaries.

A team of Kenya Navy divers are helping with the search and recovery efforts.