Abba Kyari, other Africans who succumbed to COVID-19 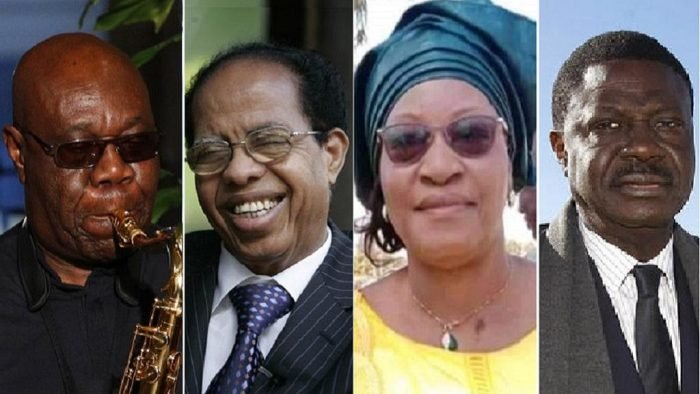 The casualties cut across age groups. From the death of a 6 year-old in Kenya, older patients in most instances and persons in the youth bracket.

From top politicians – former presidents, prime ministers and lawmakers, to entertainment icons and top sportsmen, the virus has left in its wake prominent casualties.

Chief of Staff to Nigeria president Muhammadu Buhari died on Friday April 17, the presidency confirmed in a statement posted by Buhari’s spokespersons on early Saturday.

Kyari had been diagnosed with coronavirus which he is believed to have contracted whiles on official duty in Germany. He was transferred from the capital Abuja to Lagos for medical care.

A Nigerian doctor, Emeka Chugbo, succumbed to COVID-19 after contracting the virus while managing an infected patient at his private clinic.

The doctor was admitted to Lagos University Teaching Hospital on Monday and died on Wednesday, according to the hospital’s director Chris Bode.

Mr Bode said the doctor was brought to the hospital with severe symptoms. The Nigerian Medical Association (NMA) said the deceased was exposed while managing a patient who died on Friday.

Somalia lost a regional official to COVID-19 on Sunday, April 12.

The death of Khalif Mumin was the second in the Horn of Africa nation. He died at a hospital in the capital Mogadishu, the Maritini Hospital is Somalia’s only coronavirus treatment center.

The deceased was a top official of the Hirshabelle region of Somalia.

He is the first serving Somali minister to succumb to the disease.

The death of Ghanaian Professor Jacob Plange-Rhule, occurred in the early hours of April 10 in the capital Accra at the University of Ghana Medical Centre, where he had been on a brief admission.

He was the Rector of the Ghana College of Physicians and Surgeons, in spite of succumbing to COVID-19 a senior member of the Ghana Medical Association, who confirmed the death stressed that Plange-Rhule had an underlying medical condition.

Mahmud Jibril was a former head of the rebel government that overthrew Libyan leader Muammar Gaddafi in 2011.

He died of the coronavirus in an Egyptian hospital, his party confirmed on April 5.

The 68-year-old former Prime Minister was in Cairo where he had been hospitalised for two weeks, said Khaled al-Mrimi, secretary of the Alliance of National Forces party founded by Jibril in 2012.

Senegal also mourned its first coronavirus death with a journalist and sports administrator, Pape Diouf. The 68-year-old was a former president of French soccer club Marseille between 2005 and 2009.

In Zimbabwe, a prominent broadcaster Zororo Makamba, 30, became the first confirmed person to die of COVID-19. He had underlying medical conditions, making him more vulnerable to complications arising from the virus.

He had travelled to New York in February and returned home on March 9, transiting through Johannesburg in neighbouring South Africa.

Over in Central Africa, coronavirus claimed a music star from Congo reputed by his fans as ‘King of soukous’ – a high tempo dance music enjoyed across the continent.

Aurlus Mabélé real name is Aurélien Miatsonama, was from Congo-Brazzaville and moved to France in the 1980s. He died in a Parisian hospital, aged 67.

In late March, a former president of the Republic of Congo died after contracting coronavirus. Jacques Joaquim Yhombi-Opango breathed his last at the age of 81 in a Paris hospital.

His family confirmed that he had underlying health conditions before contracting the virus. Yhombi-Opango was president of Congo-Brazzaville from April 1977 until he was toppled in February 1979 by the current president Denis Sassou Nguesso.

Cameroonian Afro-jazz legend, Manu Dibango’s death is one that hit the continent and beyond.

The ‘Soul Makossa’ author died at the age of 86. His family disclosed in a Facebook post that the singer and celebrated saxophonist’s death was as a result of the new coronavirus.

Dibango is celebrated for one of the biggest planetary hits in world music, “Soul Makossa” (released in 1972).

He was said to be the first global celebrity to die from the virus.