Tigray rebels have taken the tourist town of Lalibela 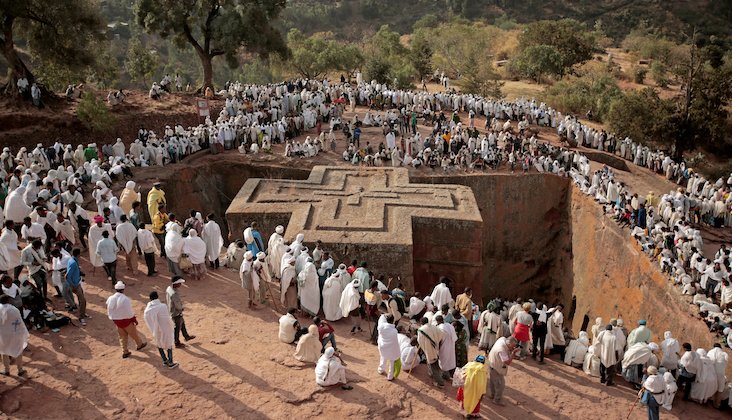 Rebels from Ethiopia’s northern Tigray province have seized the UNESCO-listed city of Lalibela, in the next door Amhara region.

Fighting in Ethiopia’s civil war is now spreading across the north of the country, with the Afar and Amhara regions seeing sustained fighting.

Government-allied forces from the Amhara region were said to have left the city before the arrival of the rebels.

“We’ve seen the reports that Tigrayan forces have taken Lalibela. We call on the TPLF to protect this cultural heritage,” said US State Department spokesman Ned Price.

Lalibela is a pilgrimage site for tens of thousands of Ethiopians, and an important tourist attraction for the country.

The north of Ethiopia has seen conflict affect regions beyond the epicentre of Tigray, where Prime Minister Abiy had hoped to quickly put down a rebellion launched in November 2020.

Afar regional spokesperson Ahmed Koloyta said that 54,000 people from their homes by Tigray fighters, who now controlled three districts in the region. The region is strategic for control of Ethiopia’s vital lifeline between the port at Djibouti and the capital Addis Abbaba.

In Amhara, the United Nations aid chief Martin Griffiths says that 200,000 people have been displaced by fighting.

It marks a turnaround in the conflict; previously, Tigrayan farmers had been pushed out of lands by Amhara-linked militias.

“Abiy is in no position to confront the Amhara political elite on this issue, as he is dependent upon their support to stay in power. Being brought to the premiership by the qeerroo protest movement on an Oromo nationalist ticket, Abiy soon deserted his ethnic base and shifted to an Ethiopian nationalist policy”, writes Kjetil Tronvoll.

The Amhara deputy president Fanta Mandefro told AFP that he fears reprisals. “I believe now, enough is enough. Because the TPLF is no more in Tigray. TPLF is moving deep into Amhara territories,” said .