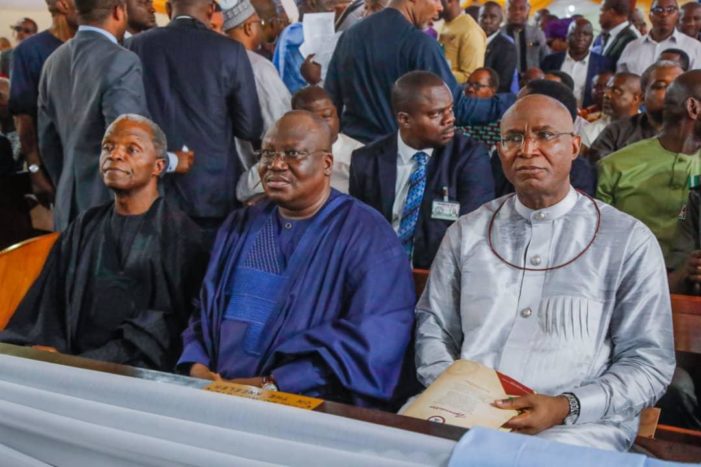 The trio was among notable Nigerians that attended the Thanksgiving Mass for Omo-Agege at Mother of the Redeemer Catholic Church, Effurun, Delta State.

Osinbajo, in a remark, said that Omo-Agege was a well educated and  distinguished lawyer, who had practiced at home and abroad.

According to the vice President, it is not just Omo-Agege’s brilliance that is propelling him, but his courage, loyalty and reliability moved him first as a politician and then to the exalted position of  Deputy Senate President.

“ I think that both Omo-Agege and Sen. Lawan were the unanimous choice of most of us in the All Progressives Congress (APC) in the leadership of the APC.

“There was very little doubt that these two individuals were the ones that we wanted and everybody worked very hard indeed to make sure that came to be.

“And the reasons are very simple—Lawan has always proved to be very reliable and always a party person and so is Omo-Agege.

“In most of the things people were shy or afraid to do, Omo-Agege stood up and was ready to be counted at the right time.

“I think that for his courage and for his steadfastness and for his reliability, not only was he rewarded by his constituents who he loves very much but also by our great party, and by the 9th Senate by his election to the position of Deputy Senate President,’’ he said.

He said that with the qualities Omo-Agege possessed, he would still achieve more politically in Nigeria.

The vice president prayed God to continue to bless the deputy senate president.

On his part, Lawan said he was in the church to thank God for his blessings on his deputy.

Lawan said that the more God was appreciated for his blessings, the more blessings he would bestow.

He said that the senate would continue to work hand in hand with the executive in solving the security concerns in the nation.

On his part, Okowa congratulated Omo-Agege who he described as his brother for attaining such a political height.

He said that the feat was not just for the Omo-Agege’s constituents in Delta-Central but for the entire state.

“We rejoice with you as a state; your position is a call to service not just to your nation but to Deltans,’’ he said.

In his comment, Omo-Agege said he was immensely grateful to God for what he had achieved as it would not have been possible without God.

He expressed his appreciation to President Muhammadu Buhari, Osinbajo, APC National Chairman, Adams Oshiomhole, APC governors and all party faithful, who were instrumental to his emergence as Deputy Senate President.

He said he would continue to strive to promote national unity and attract the dividends of democracy to his constituency.

Earlier in a sermon, Very Rev. Fr. Anthony Ozele, President, Warri Diocesan Priests Association, said that it was wise to appreciate God for His goodness.

He said that the celebration was not just for Omo-Agege and his family but for the entire Urhobo nation.

Ozele said that the rate of killings, kidnapping, cultism, immorality and other crimes in Nigeria was worrisome.

He  said most crimes were brewed by hatred and called on Nigerians to  love one another.

According to the priest, Nigeria has a bright and prosperous future as God has plans for the nation.

“Nigeria will rise; there is hope; I charge each and every one of us, let stand up for Nigeria.

“Let us stand up for hope; all foes and enemies of Nigeria will be vanquished; Nigeria will survive,’’ he said.

Speaker of the House of Representatives, Femi Gbajabiamila, Senate Minority Leader, Enyinnaya Abaribe and other principal officers of the Senate also attended the event.

The Thanksgiving also attracted some serving governors, Secretary to the Government of the Federation Boss Mustapha, APC National Chairman, members of the National Assembly, political class, traditional rulers and the clergy.(NAN)