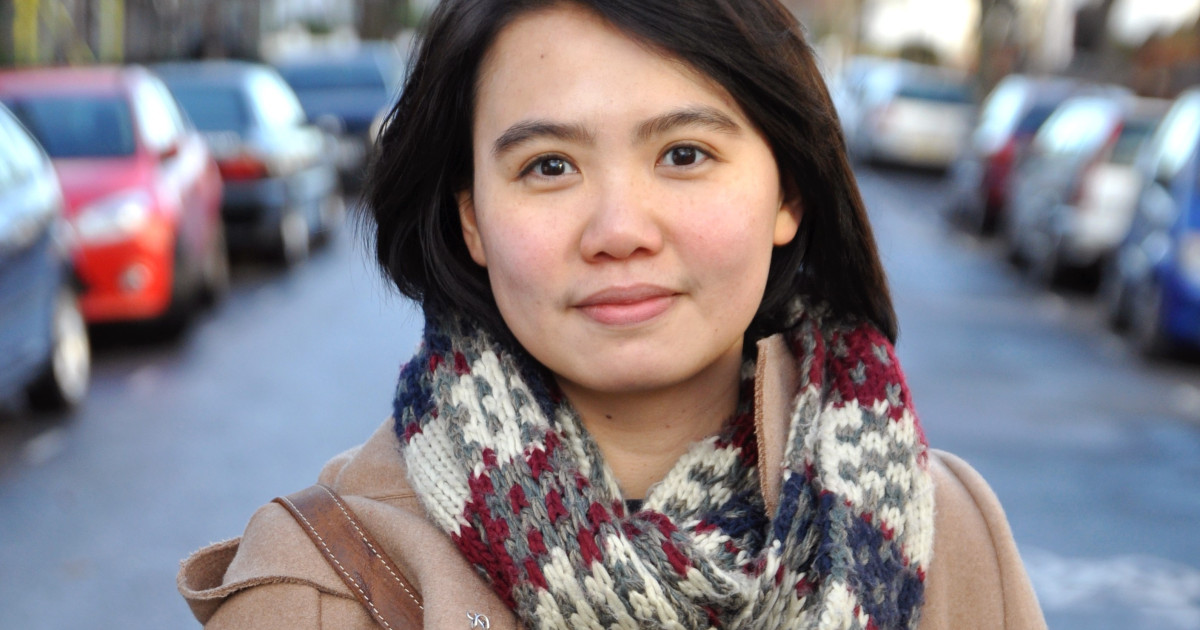 Kuala Lumpur, Malaysia – Hearing the voice of her dead grandmother inside her head is the icing on a cake of problems for Malaysian zillennial Jessamyn Theo.

Ah Ma has come back from the afterlife to nudge Jess into helping the Black Water Sister, a resentful Chinese goddess, just as the US-born Malaysian Chinese Jess moves with her parents to their native Penang island in northwestern Malaysia.

The fact that Jess is jobless, and that they are all living off the generosity of relatives she barely knows, does not make adapting to the new and more conservative Asian society any easier – especially when she has yet to come out as a lesbian.

The premise of Black Water Sister, the latest novel from award-winning London-based and Petaling Jaya-born writer Zen Cho, makes for a groundbreaking cocktail of fantasy and urban realism set in contemporary Penang – an unusual setting for Malaysian works of fiction in English, which are most often set in the country’s past.

“Zen Cho is something of a rarity – a marvellous teller of stories who manages to combine an understanding of Southeast Asian culture and language – Malaysia particularly – with an appreciation of the modern 21st-century concerns of science fiction and fantasy,” Jonathan Strahan, an award-winning Australian editor and publisher of science fiction, fantasy and horror at Tor.com and the landmark American fantastic fiction magazine Locus, told Al Jazeera.

“Her most recent novel, Black Water Sister, is perhaps the best example of this. A queer young woman returns from living in the US with her parents to try to navigate the space between being a Malaysian who grew up in San Francisco, and is now trying to be part of the world she left behind. It’s fascinating because we see the genuine tensions between two cultures approaching the same issue, in different ways, both shown respectfully and thoughtfully and in a very human way.”

A world in transition

Cho, who divides her time between writing fiction and practising as a lawyer in the United Kingdom, has already won a number of awards including a prestigious Hugo for her work and was a 2013 finalist in the Astounding Award for best new writer of science fiction and fantasy. Her books have been translated into languages including French, Spanish, Chinese and Japanese.

She says her main inspiration for Black Water Sister was investigating the syncretic Chinese religious tradition in which she grew up, which combines gods and influences from Buddhism, Taoism and folk beliefs.

“My family moved to America when I was a small child, returning to Malaysia after a year or so, and initially we lived in Penang,” Cho told Al Jazeera about her choice of location. “I’m just really attached to Penang; it’s one of my favourite places in the world. For all its history, it’s a very modern city, and so many of the contradictions of modern life are laid bare there.

“My parents were quite superstitious, so they never explained too much about what it was all about when we visited temples and paid our respects, for fear of running afoul of some taboo or other,” she said. It was only when Cho came across the work of anthropologist Jean DeBernardi as an adult that she was finally able to put the beliefs of her childhood in context.

“DeBernardi visited Penang in the 1980s to undertake research into Chinese popular religion and spirit mediumship, and her books, especially The Way that Lives in the Heart (2011), are so rich and fascinating. Once I read them, I knew I’d write a novel about this topic,” Cho said.

Having fast-developing Penang as its main setting, Black Water Sister inevitably deals with themes of transition and change.

After being awarded a joint UNESCO World Heritage listing with the southern Malaysian city of Melaka in 2008, Penang’s main city of George Town started gentrifying to meet the needs of an ever-increasing number of visitors and was preparing to welcome eight million tourists when COVID-19 brought the industry to a sudden halt.

The emphasis on commercial development, however, was to the detriment of the very same living heritage that convinced UNESCO to declare the city “a unique architectural and cultural townscape without parallel anywhere in East and Southeast Asia” in the first place.

“It’s almost impossible to think of Penang without thinking about gentrification, so that’s one of the themes that found its way into the book,” said Cho, who believes that time necessarily changes things. “Penang has soul, but equally, if traditions don’t survive, it’s often partly because they no longer serve the evolving needs of the community. A place like Penang is not a museum; it’s a place where people live, so it’s going to change because people don’t stay the same.”

Nothing exemplifies how Penang’s traditions have changed over time better than Black Water Sister’s trinity of female characters. Like a time-travelling Russian Doll, Jess’s mind simultaneously contains her own present, but also the recent and more ancient past of her grandmother and the angry goddess her grandma adores.

“One of Black Water Sister’s major themes is that who you are depends on where and when you are,” Cho said to Al Jazeera. “Jess already knows this, as an immigrant, a returnee, a closeted lesbian. Ah Ma and the Black Water Sister serve to illustrate that theme.”

From what the reader learns about Ah Ma, she is no less clever or determined than Jess, “but her life was completely different because she was born at a time and into a culture in which women were not valued. So, she’s illiterate, she was married off young to an abusive man, she had to do these shitty jobs to survive,” said Cho. The Black Water Sister represents an even worse paradigm in time – it was her society’s cruelty and indifference to women that killed her.

“Jess contends with the burden of these women’s trauma, but though they have supernatural powers, she has resources and capabilities they lack -  because as a 21st-century woman born to parents who thought it was important that she be safe and happy and educated, she has privileges the other two lacked,” said Cho.

One of Jess’s privileges is also being able to come to terms with her nonconformist sexuality in the United States, rather than in majority Muslim and more conservative Malaysia.

In the real world, talk of strengthening penalties against LGBTQ Malaysians earlier this year underscored the state’s continued hostility towards anyone outside the mainstream.

At the end of June, a government task force proposed amendments to Sharia (Islamic) law in response to social media posts celebrating Pride Month, so that users could be targeted for allegedly insulting Islam by “promoting” the LGBTQ lifestyle.

But in Cho’s fictional world, unconventional LGBTQ characters are the norm: she wrote people of colour and homosexual protagonists in both her two successful historical fantasy novels set in Regency London, Sorcerer to the Crown (2015) and The True Queen (2019), and also in her wuxia novella The Order of the Pure Moon Reflected in Water (2020). Wuxia is a type of Chinese historical fiction focused on the adventures of martial artists.

“Aside from being marginalised and rendered vulnerable, LGBTIQ[1]  Malaysians also find themselves minoritised,” said Joseph N Goh, a senior lecturer in Gender Studies at Monash University Kuala Lumpur, and author of books such as Becoming a Malaysian Trans Man: Gender, Society, Body and Faith (2020). “They are spoken at and spoken for. They are never treated as equal conversation partners, and their stories are hardly ever told. Any written work about LGBTIQ Malaysians that is holistic, affirming and celebratory is always welcome.”

In terms of this peculiar choice of characters, Cho believes that diversity is a fact of life, and that the reason why some types of people are more commonly seen in the literature and media distributed worldwide is a result of power imbalances with deep historical roots. “But it’s not inherently more natural to write a story about a straight white man than about a straight Black man, or a queer Asian woman,” said Cho. “I think that the United States and the UK’s publishing is growing more aware of the importance of inclusivity, though it has a long way to go.”

When asked if publishing Black Water Sister in Malaysia could have proved more challenging, Cho says that almost no local publishers release English-language novels. “I suppose if I had nonetheless managed to find a local publisher or self-published the book, some bookshops might then have refused to stock it,” Cho said to Al Jazeera.

She remembers that a major Malaysian bookshop chain refused to stock a local anthology containing one of her short stories because it featured lesbians. “If the book had become popular despite that, it might have attracted enough mainstream attention to get censored or pulled off the shelves by the authorities. But when you write in English in Malaysia, you’re already limiting yourself to a niche audience, so you can fly under the radar somewhat. It’s not like having a queer-friendly plotline in a prime-time Malay drama,” she said.

Cho, who also edited a Malaysian anthology of English-language fiction titled Cyberpunk: Malaysia (2015), believes that the current Malaysian English-writing scene is “cut out from our history” because influential early works by Malaysian authors like Lloyd Fernando and K S Maniam are relatively inaccessible compared with the widely available imported classics of international Anglo-American literature.

“But the scene is growing and the prospects are good,” said Cho. “What I’d like to see is more authors based in Malaysia, and more non-Chinese authors getting published internationally.”