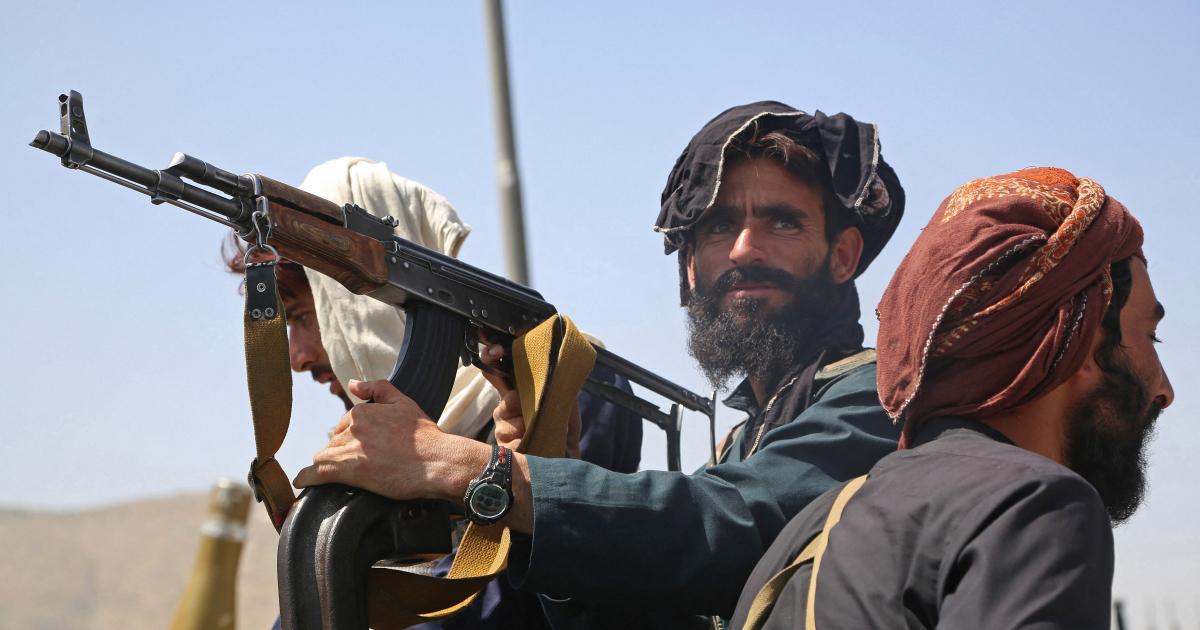 Evacuation flights from Afghanistan have resumed a day after the Taliban’s military takeover triggered panic in Kabul and thousands mobbed the city’s international airport in a desperate attempt to flee.

A Western security official told Reuters news agency on Tuesday that the Kabul airport’s tarmac and runway – which troops from the United States control – were now clear of crowds. The official said military flights evacuating diplomats and civilians from Afghanistan have started taking off.

At least seven people died in Monday’s chaos, included several people who clung to the sides of a jet as it took off.

In Washington DC, US President Joe Biden said he stood “squarely behind” his decision to withdraw troops from Afghanistan and fired scorching criticism at the country’s former Western-backed leadership for failing to resist the Taliban.

“I stand squarely behind my decision,” he said in a televised address from the White House. “After 20 years, I’ve learned the hard way that there was never a good time to withdraw US forces.”

The Taliban have meanwhile declared the war in Afghanistan over and a senior leader said the group would wait until foreign forces had left before creating a new governance structure.

China said it was ready for “friendly relations” with the Taliban, while both Russia and Iran also made diplomatic overtures.

George W Bush, the former US president, has called on his country to expedite the evacuation of Afghans who helped Washington’s war effort.

“The Afghans now at the greatest risk are the same ones who have been on the forefront of progress inside their nation,” he said in a statement.

“The United States government has the legal authority to cut the red tape for refugees during urgent humanitarian crises. And we have the responsibility and the resources to secure safe passage for them now, without bureaucratic delay. Our most stalwart allies, along with private NGOs, are ready to help.”

The agency cited an official familiar with the talks and who spoke on condition of anonymity because he is not authorized to speak to the media.

Muttaqi was a higher education minister when the Taliban last ruled and he began making contacts with Afghan political leaders even before Afghan President Ashraf Ghani secretly slipped away from the Presidential Palace on the weekend.

The official says the talks underway in the Afghan capital are aimed at bringing other non-Taliban leaders into the government that Taliban spokesman Suhail Shaheen has said will be an “inclusive Afghan government”.

Afghans familiar with the talks say some rounds have gone late into the night and have been underway since soon after Ghani’s departure.

US Secretary of State Antony Blinken held separate discussions on Monday with counterparts in the United Kingdom, the European Union, Turkey and NATO on the situation in Afghanistan and Washington’s efforts to bring back their citizens.

“The Secretary expressed his profound appreciation for the EU, NATO, Turkey, and the UK’s efforts in Afghanistan,” the State Department said.

Indian embassy officials in Kabul, including the ambassador, are being evacuated from the Afghan capital, a spokesperson for the foreign ministry in New Delhi said.

“In view of the prevailing circumstances, it has been decided that our ambassador in Kabul and his Indian staff will move to India immediately,” spokesperson Arindam Bagchi said on Twitter.

In view of the prevailing circumstances, it has been decided that our Ambassador in Kabul and his Indian staff will move to India immediately.

The airport runway and tarmac, overrun on Monday by thousands of people desperate to flee from the Afghanistan capital, are now clear of crowds, the official said.

US forces, which are in charge at the airport, had halted the evacuation flights because of the chaos.

Nobel Peace Prize winner Malala Yousafzai says she is deeply concerned about the situation in Afghanistan – particularly the safety of women and girls – and is calling on world leaders to take urgent action.

Yousafzai says Biden “has a lot to do” and must “take a bold step” to protect the Afghan people.

“This is actually an urgent humanitarian crisis right now that we need to provide our help and support,” 23-year-old Yousafzai told BBC Newsnight, adding that she had been trying to reach out to several world leaders.

Yousafzai survived being shot in the head by a Pakistani Taliban gunman in 2012, after she was targeted for her campaign against its efforts to deny women education.

Analyst: ‘The movie that everyone predicted but very much fast-forwarded’

Joe Biden is being criticised for his handling of the US withdrawal from Afghanistan, but analysts note that people in the US, while appalled by the scenes at Kabul airport, remain broadly supportive of their troops leaving the country.

Douglas Ollivant, a senior fellow at the New America Foundation, says that while Biden bears ultimate responsibility, few analysts or intelligence officers had predicted the speed of the Taliban’s advance.

“Ultimately, he’s the American president and the buck stops with him, but I think when we look back while none of these events have surprised analysts – all of these events were predicted – I don’t think even the most pessimistic of analysts would have predicted it would happen quite this fast,” Ollivant told Al Jazeera.

UN chief Antonio Guterres is urging all countries to accept Afghan refugees and refrain from deportations.

The world is watching events in the country “with a heavy heart”, he said on Twitter.

“Afghans have known generations of war & hardship. They deserve our full support.”

As the world is following events in Afghanistan with a heavy heart, I urge all countries to be willing to receive Afghan refugees & refrain from deportations.

Afghans have known generations of war & hardship. They deserve our full support.

Now is the time for solidarity.

US Secretary of State Antony Blinken has been speaking to his counterparts in Pakistan and India on the situation in Afghanistan.

Blinken held calls with Pakistani Foreign Minister Shah Mahmood Qureshi and Indian Foreign Minister Subrahmanyam Jaishankar, according to a State Department statement. It did not elaborate on what was discussed.

Hello and welcome to Al Jazeera’s continuing coverage of the Taliban takeover of Afghanistan. I’m Zaheena Rasheed in Male, Maldives.