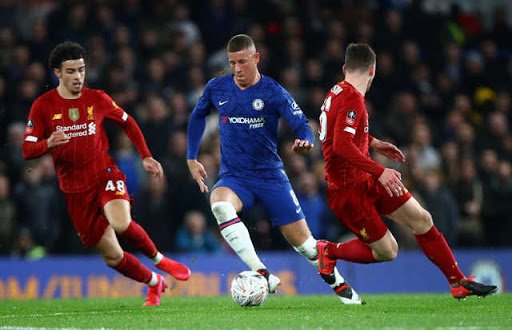 (Reuters/NAN) Chelsea completed a torrid few days for Liverpool as goals by Willian and Ross Barkley sealed a 2-0 victory to send them through to the FA Cup quarter-finals on Tuesday.

Liverpool’s 44-match unbeaten streak in the English Premier League (EPL) ended in stunning fashion with a 3-0 defeat at Watford on Saturday and they were rocked again at Stamford Bridge.

Liverpool manager Juergen Klopp made seven changes to the side which lost to Watford but he still fielded an experienced line-up, compared to the team he fielded against Shrewsbury Town.

Sadio Mane wasted several early chances and Chelsea goalkeeper Kepa Arrizabalaga, back for the first time since being dropped in January, made a remarkable triple save before half-time.

But Chelsea, with 18-year-old Billy Gilmour impressive in midfield, were merited winners as they moved through.

For Liverpool, a season of utter dominance has suddenly hit a slump with three defeats in four games in all competitions.

They lost to Atletico Madrid in the first leg of their UEFA Champions League last 16 tie before the weekend defeat by Watford.(Reuters/NAN)