After the death of George Floyd, Africa mobilises against police violence 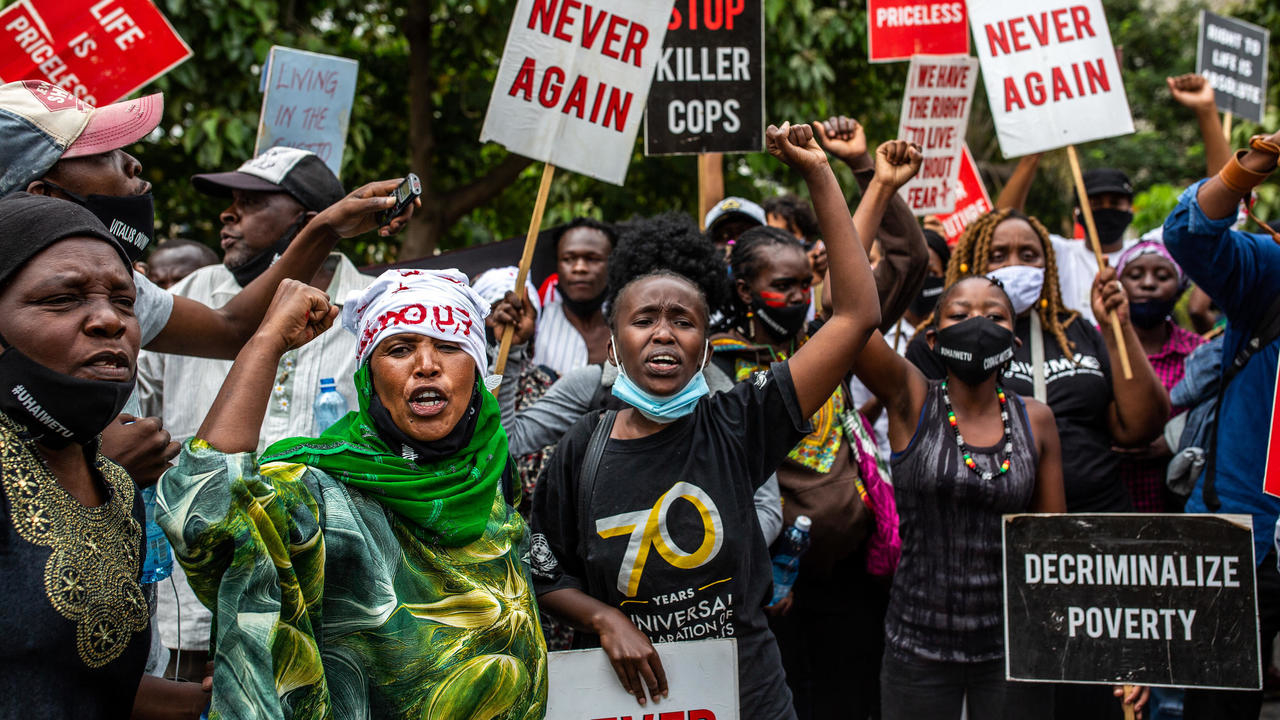 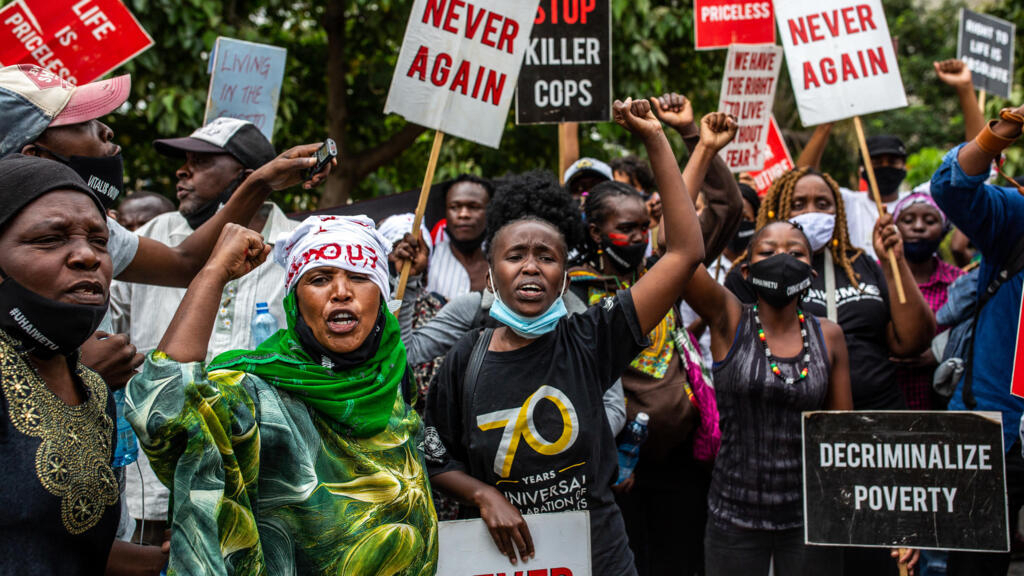 If the death of George Floyd has sparked a worldwide protest movement, Africa is not to be outdone. In Kenya, Ghana and South Africa, demonstrators are taking to the streets. Others would like to see their leaders tackle the issue more firmly, in solidarity with their “African-American brothers”.

The death of George Floyd, an African-American man who was killed by a police officer on May 25 in Minneapolis, has become a global symbol. That case of police violence sparked a worldwide wave of anti-racist protests, with marchers chanting the slogan “I can’t breathe” – the last words spoken by the 46-year-old. Demonstrations have also erupted in Africa, calling on African leaders to address their own problems of police violence, which often go unpunished.

A particular resonance in South Africa

In South Africa, the movement’s other major slogan, “Black Lives Matter”, has a special resonance in a country scarred by apartheid and still torn apart by sharp racial inequalities.

On June 8, at the call of the radical-left party, the Economic Freedom Fighters (EFF), more than 100 people gathered outside the US Embassy in Pretoria to protest racism, police violence and the US President Donald Trump.

EFF supporters paid tribute to Floyd by taking a knee and observing 8 minutes and 46 seconds of silence, the time it took for him to die under the knee of a police officer. “Enough with police brutality on our black bodies,” EFF leader Julius Malema told the crowd, standing next to the wife of a man recently killed by the South African Army enforcing the Covid-19 lockdown.

In Kenya, portraits of George Floyd plaster the walls of Nairobi. And on the same day as in South Africa, about 200 people demonstrated against police violence in the Mathare slum in the capital. Police violence has claimed at least 15 lives in Kenya since a curfew was imposed to prevent the spread of Covid-19.

The crowd consisted mainly of young people and mothers carrying placards with the names of friends, neighbours or sons killed in recent years in police operations. “Stop Killer Cops,” or “Save Our Future,” were their slogans.

The Kenyan police are regularly accused by human rights groups of excessive use of force and extrajudicial executions, particularly in poor neighbourhoods. In April, Human Rights Watch (HRW) accused the police of imposing curfews “in a chaotic and violent manner, from the beginning”, sometimes by whipping, beating or using tear gas to force people off the streets.

The organisation cited the case of a 13-year-old boy, Yassin Hussein Moyo, who died in Nairobi on March 31 after he was shot while standing on his balcony by police enforcing curfew in the street below his house.

A new scandal erupted on June 10 with the viral release of a video in which a woman suspected of stealing was tied up and dragged behind a motorcycle. Three policemen were arrested.

IPOA launches probe into assault of a suspect in Olenguruone. Video shows woman being dragged, tied on a motorcycle.

Police claim Mercy Cherono was assaulted by a mob.

Mercy said to be a member of a gang that stole from officer’s house #JKLive pic.twitter.com/wsZMjXI0Qk

“Three officers were yesterday arrested … following circulation of a video depicting a woman being whipped & dragged on a motorbike in Kuresoi South Sub-County,” the Directorate of Criminal Investigations said in a statement.

“The suspects are in lawful custody helping with further investigations into the matter,” it added.

On the Corniche des Almadies in Dakar, facing the ocean that separates Africa from the United States, 50 people – the maximum allowed because of Covid-19 – representing various associations of Senegalese civil society, gathered to pay tribute to George Floyd in this highly symbolic place: the Corniche is soon to house the Slavery Memorial.

The President of Ghana, Nana Akufo-Addo, was one of the first heads of state to respond to the murder of George Floyd.

“Black people, the world over, are shocked and distraught by the killing of an unarmed black man, George Floyd, by a white police officer in the United States of America…. It cannot be right that, in the 21st century, the United States, this great bastion of democracy, continues to grapple with the problem of systemic racism,” he wrote in a statement posted on Twitter on June 1 with Floyd’s face on a black background. “We hope that the unfortunate, tragic death of George Floyd will inspire a lasting change in how America confronts head on the problems of hate and racism.”

Niger’s President Mahamadou Issoufou said Thursday that the death of George Floyd was “the symbol of the old world that must be changed”, during a video conference with his peers in the African Union. “Our conference must condemn this heinous act without reservation.”

The African Union addresses the problem

The Chadian Chairperson of the African Union Commission, Moussa Faki Mahamat, was very quick to react to George Floyd’s death, calling it a “murder” as early as May 29. In a statement, he said he “strongly condemns the murder of George Floyd that occurred in the United States at the hands of law enforcement officers”.

“Recalling the historic Organisation of Africa Unity (OAU) Resolution on Racial Discrimination in the United States of America made by African Heads of State and Government, at the OAU’s First Assembly Meeting held in Cairo, Egypt from 17 to 24 July 1964, the Chairperson of the African Union Commission firmly reaffirms and reiterates the African Union’s rejection of the continuing discriminatory practices against Black citizens of the United States of America,” the statement continued.

The Chadian diplomat was referring to the very first OAU conference of July 1964 in Cairo, in which the iconic leader of the Nation of Islam, Malcolm X, participated as an observer. He delivered a pan-African speech to “his African brothers and sisters” on the discrimination suffered by African-Americans on the other side of the Atlantic at that time.

Some intellectuals, however, see it as opportunistic for the continent’s leaders to take up the problem in this way. Among them is the Cameroonian economist Célestin Monga, who called on African politicians to put their own houses in order first.

While he commended the “(anger and indignation) of African political leaders over the assassination of George Floyd and police brutality in [the United States]” in a tweet, he said he wished “they would be just as quick to issue condemnations when our police and soldiers are martyring our citizens on a daily basis”.

A hundred African writers hope that the repercussions of George Floyd’s murder will lead to the revival of the pan-African dream. In an open letter, they call for Africa to be a “refuge” for its diaspora.

“We ask that African governments recognize our alliance and ties with our brothers and sisters across borders, from America to Brazil and throughout the rest of the diaspora. Let them offer those who choose it a refuge, a home and citizenship in the name of pan-Africanism,” the African authors urged.

“We note with dismay that what Malcolm X said in Ghana in 1964, namely that ‘for the 20 million of us in America who are of African descent, this is not the American dream, this is the American nightmare’, remains true for 37 million (African-Americans) in 2020.”

This article has been translated from the original in French.